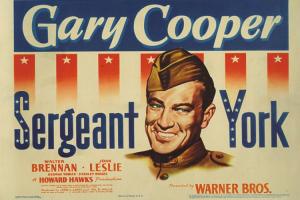 Based on the personal diaries of Alvin C. York

The story of Alvin York’s (Cooper) journey from draftee and conscientious objector, to a celebrated World War I hero.

This Hollywood classic almost wasn’t made. Alvin York had already published an autobiography and had turned down multiple offers from Hollywood to tell his story. Eventually York saw the film as a way to secure funding for a religious school he hoped to build and he personally negotiated a contract with Warner Bros. Studio. Howard Hawks (Red River) was signed on to direct the film. The script was partially taken from York’s own diaries with other moments being fictionalized. The writing was done by Abem Finkel (Jezebel), Harry Chandlee (The Jolson Story), Howard Koch (Casablanca), John Huston (The Asphalt Jungle), and Sam Cowan. Gary Cooper (High Noon) stars in the title role of this one. The other stars include Walter Brennan (The Far Country), Joan Leslie (Yankee Doodle Dandy), and Ward Bond (The Maltese Falcon). This film was a financial and critical success, earning eleven Academy Award nominations, including Best Picture and Best Director. Some of the success can be attributed to the attack on Pearl Harbor, which occurred while the film was in theaters. Sergeant York also became a major recruiting tool for the United States military during World War II. 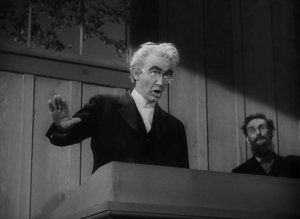 This is an interesting biopic, written about a reluctant hero. The story is a mix of fiction and fact. The facts come from the diaries, official war records, and interviews with York. The fiction comes from the work of the five screenwriters. The mix creates a movie that works most of the time. The first half of this film focuses on the troubled early life of Alvin York. The script makes sure to double down on this aspect, creating a character that is almost entirely unlikable. These early scenes are impactful, but they also keep the pace of the story moving very slowly. Moving past that, the story begins to get momentum. The writing begins to redeem York and build unique relationships between him and the ever-expanding world he lives in. There are some great moments built around the relationships that pay off throughout the rest of the film. The action in the film is limited but strong, and the payoffs on the twists and turns of the story work nicely. The dialogue in this one is one aspect of the movie that has not aged well. The writers attempted to create a style of speech that would fit into the backwoods version of the world they created. While it’s not a major problem, there are some moments that feel really campy. Overall, this is a very nicely written film. While it’s a war movie, this one spends little time on the battlefield. Instead, this one focuses on the motivations of one man. The writers shared a nomination for Best Original Screenplay. 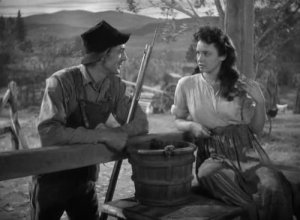 This one features a very talented cast that does good work with the material. Gary Cooper does an excellent job throughout this one. His best moments come early in the film as his performance crafts a troubled and unsettled character who is at his limit. There are some spiritual moments in this one that might have felt melodramatic were it not for his ability to understand the importance of subtlety. Throughout the movie he makes the most of the unique dialogue written for his role. His chemistry with the cast is evident throughout this one. 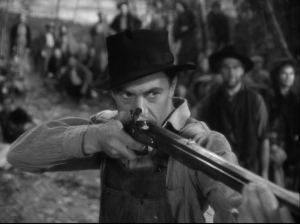 Walter Brennan also delivers a great performance in this one. His role works as a catalyst for a number of important events in the movie, and he delivers every time. He also connects wonderfully with Cooper. Their moments together on screen make for some of the best scenes in the entire film. Joan Leslie does a good job with her role as well. Like Brennan, she connects with Cooper and makes their scenes work nicely. Playing the faithful mother of the title character, Margaret Wycherly also brings something good to the film.

In addition to good chemistry with Cooper, she seemed to understand the religious motivations of her character perfectly. Prolific actor Ward Bond also gives a good performance. The cast generally does good work in this one. Some of the smaller roles do feel a little campy, mainly due to the attempts at overselling the folksy dialogue. Thankfully, there is a lot more to like in this one. Gary Cooper would earn his first Oscar for Best Actor, and Walter Brennan would be nominated for Best Supporting Actor. Margaret Wycherly was also honored with an Oscar nomination for Best Supporting Actress. 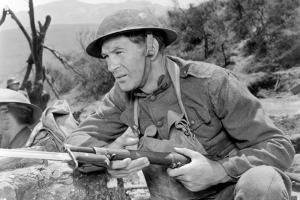 The production work on this film is excellent. The film is beautifully shot, taking advantage of the sets and locations. Despite some slower moments in the early parts of the movie, this is also nicely edited. There isn’t anything in the film that feels unnecessary, and the action moves at a nice pace during the war scenes. Among the Oscar recognition, this one would be nominated for Best Cinematography (B&W) and Best Art Direction (B&W). Sergeant York would also win the Oscar for Best Film Editing. The film also has good sound work and a solid score. The work earned additional nominations for Best Sound and Best Original Score.

This is an interesting movie that was made in a very unique period of American history.  A simple biopic became a major recruiting tool for the U.S. military at the start of World War II. This isn’t a perfect movie, but the performances are worth checking it out. Fans of Cooper and Brennan will definitely appreciate what this one has to offer. I would also suggest this to fans of classic war films and biopics. I give this one 3.8 out of 5 stars.