Based on the novel Before The Fact by Anthony Berkeley

Lina (Fontaine) and Johnnie (Grant) are newlyweds, just starting their life together. Very quickly Lina finds out that Johnnie is not the responsible husband she had hoped for. As she digs deeper, she begins to fear that he’s plotting to kill her.

Suspicion is one of the many classic thrillers directed by Alfred Hitchcock (Rear Window). This one is based on the 1932 book Before The Fact, written by Anthony Berkeley (Flight from Destiny) under the name Francis Iles. The screenplay was written by Samson Raphaelson (That Lady in Ermine), Joan Harrison (Rebecca), and Alma Reville (Shadow of a Doubt). Cary Grant (His Girl Friday) and Joan Fontaine (You Gotta Stay Happy) star in this one. The cast also includes Nigel Bruce (Limelight), May Whitty (Mrs. Miniver), and Cedric Hardwicke (Rope). The film would earn an Academy Award nomination for Best Picture. 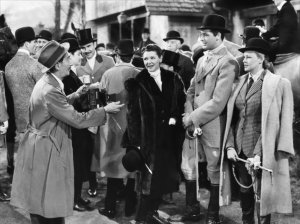 This is a classic mystery with a twist, told in the style of many great Hitchcock films. The beginning of the movie has some really charming moments that set up the relationship between Lina and Johnnie. (This has a similar tone to the early parts of Rear Window.) From there the story begins to peel apart the marriage and reveal dark secrets. The story puts Lina in increasingly difficult positions, and every additional piece of information seems to pile on. The characters in this one are a strange collection of people who feel like they were taken from an Agatha Christie novel. They’re playful and interesting, but they all carry the potential to be bad. The dialogue is strong, and the action helps to build the tension and suspense. The twists and turns of the story help to build a sense of foreboding that pays off in a strong conclusion.

The acting really makes this one special. Cary Grant was an excellent choice to play Johnnie, the playboy husband with bad habits. It’s a role that mostly fits into his wheelhouse, but also pushes him into some more serious moments. His chemistry with Joan Fontaine also helps to give the relationship between Johnnie and Lina a sense of realism. Fontaine delivers on the most difficult role in this film. Her performance is subdued and tense, and allows for the emotion to explode at just the right moments. She would eventually win an Oscar for Best Actress, making her the only actor to win an Academy Award for an Alfred Hitchcock film. 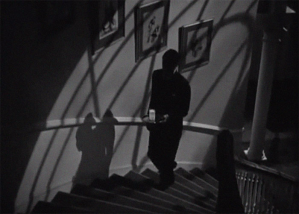 Suspicion was beautifully shot by cinematographer Harry Stradling Sr. (A Streetcar Named Desire). He found great ways to increase the tension through excellently composed shots. The light and shadows also play a major part in the ever-darkening tone of the film. The score by Franz Waxman (Sunset Boulevard) also adds an excellent layer to this one. His work earned him an Oscar nomination for Best Scoring of a Dramatic Picture.

This is an excellent movie, made by the master of suspense and featuring two wonderful actors. If you’re a fan of Hitchcock this is a must-see, I would also suggest watching it again if it’s been a while. Fans of the stars should also check this one out. I give this one 4.8 out of 5 stars.