Bob (Duchovny) is trying to adjust after his wife unexpectedly passed away. When he unexpectedly connects with the woman (Driver) who received his wife’s heart, he begins to wonder if it’s time to move forward.

This movie was written by Don Lake (Downsizing) and Bonnie Hunt (Zootopia). In addition to writing, Hunt also acted in this one and directed it. The cast of this one includes some of her frequent collaborators, including David Duchovny (Zoolander) and David Alan Grier (The Big Sick). Minnie Driver (Grosse Pointe Blank), Robert Loggia (Big), and Carroll O’Connor (Kelly’s Heroes) also star in this one. This would mark the final feature film appearances by Carroll O’Connor, William Bronder (Stand By Me), and Dick Cusack (While You Were Sleeping).

This movie is a mix of comedy, drama, and romance that fits in nicely with similar films from the late 1990s and early 2000s. This story is one that has been told many times, focusing on a man trying to find his way after tragedy strikes. The early moments are predictable and often rely heavily on the kind of clichés that you might expect. Only once the story gets moving does anything unexpected seem to happen. This is where the more unique aspects of the plot begin to show up. These little twists in the arc help to keep some aspects of the story interesting, but it never really surprises. The dialogue is fun, and some of the secondary characters add nice moments to the story. This story stays too predictable to stand out among similar films from the era. The redeeming quality of the script is the subtle charm built into the different relationships.

The actors didn’t have a lot to work with, but the performances are solid from most of the main cast members. David Duchovny does a decent job with a role that seems just outside of his wheelhouse. He handles the more serious moments just fine, but never seems to connect with the romantic material. His chemistry with Driver is good, and this definitely helps his performance out. Minnie Driver does a really good job with her role in this one. Unlike Duchovny, she seemed to be the perfect fit for this story. She’s charming and witty, but also able to pull off some of the more emotional moments. She also has great chemistry with all her fellow actors. 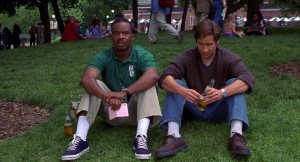 The rest of this cast creates some fun moments throughout the movie. David Alan Grier made the most out of his role. Carroll O’Connor and Robert Loggia are just a couple more actors who found great moments in smaller roles. The actors did as much as they could with the material they were given. There aren’t any bad performances in this one, and the cast does a lot to keep this one fun.

This movie looks and sounds like most of the romantic “dramedies” from around that time. The production doesn’t really do anything special or unique. Still, it’s a competently made film that produces a decent finished product. Despite some of the story issues, this is a film with a unique charm that a lot of people have connected with. If you’re a fan of any of the stars, you should make sure to check this one out. I would also suggest this to anyone who loves the romantic comedies of the late 1990s. I give this one 3 out of 5 stars.