Based on the book First Man: The Life of Neil A. Armstrong by James R. Hansen

The story of the events that led Neil Armstrong (Gosling) to become the first man to walk on the moon. 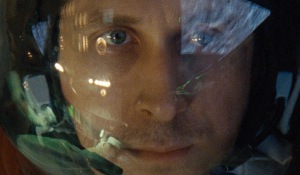 One of the highly anticipated titles of 2018 was this film, directed by Damien Chazelle (La La Land). The story was taken in part from the book First Man: The Life of Neil A. Armstrong by James R. Hansen. The script was written by Josh Singer (Spotlight). The film stars Ryan Gosling (Only God Forgives) as Armstrong, and also includes Claire Foy (Unsane), Jason Clarke (Zero Dark Thirty), Kyle Chandler (Manchester by the Sea), and Corey Stoll (Ant-Man).

This is a fascinating true story about one of the highlights (if not the highlight) of the United States space program. The early moments of this movie do a great job establishing Armstrong as the central figure in the story. This is also where Josh Singer wisely spends some time looking at the early events that shaped Armstrong’s life and career. The relationships throughout the movie are wonderfully crafted, with all of the good and bad elements that make them feel real. The story also allows time to focus on the successes and failures of the space program, and the many lives lost along the way.

As the story shifts towards the moon landing, there are a number of great scenes that highlight the risks being taken by Armstrong and his crew. These moments allow room for the stress that this mission put on the men and their families. This is also where the film acknowledges the lives lost in the pursuit of the moon landing. The dialogue throughout the movie is strong, and avoids the big speeches and cliche moments that could have ruined the experience. The story also has a wonderful payoff that keeps the focus on the central characters. This is a wonderfully written movie that creates great characters and tells a wonderful story. 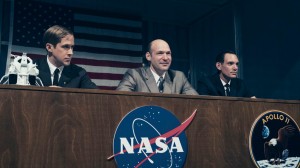 This movie opens with some dizzying visuals that immediately immerse the audience in the high-risk work Armstrong was doing. The cinematography does a great job bringing intensity to the action throughout the film. The scenes in space are also captured wonderfully. The weakness of the visuals comes from the choice to use a handheld style of shooting in more intimate moments. In those scenes the visuals almost become distracting. Thankfully these moments don’t make up the majority of the movie. There is also a lot to like with the visual effects, set design and decoration, and costuming. 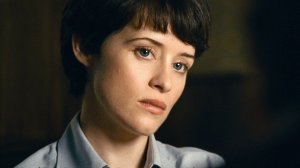 The score for this one also does a great job highlighting the tone of the film. Justin Hurwitz (Whiplash) did a great job composing music that is inspiring. It’s also music that doesn’t rely on patriotic themes and military style music to get things done. The sound design also plays a major part in the success of this movie. Some of the more intense moments rely on the tiniest details in the sounds around the characters.

The cast did a lot of great work throughout this one. Ryan Gosling leads the way with an emotional and intense performance that really brings the audience inside the mind of Neil Armstrong. He does a really good job of bringing out the emotions within a very subdued character. He also connects wonderfully with Claire Foy throughout the movie. Her performance is equally good. Like Gosling, she was able to connect with the material and bring the audience into her character’s experience. She also does a great job with some incredibly intense moments.

Jason Clarke, Kyle Chandler, and Corey Stoll are just a handful of the actors who helped to bring this story to life. Their performances, and many others, give the world of the story a richness it deserves. Along with Gosling, these actors did a great job bringing an authenticity to the work they were portraying. The physical and intellectual aspects of the story feel very genuine. 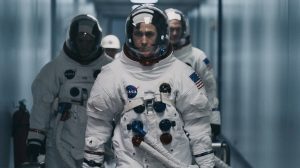 This isn’t a perfect movie, but it’s a very ambitious attempt that pays off more than it doesn’t. The main issues might be with some of the visual styling choices. Otherwise, the actors did a great job turning a solid script into something very engaging and exciting. If you’re a fan of The Right Stuff this is one worth checking out. I would also suggest it to fans of the stars. If you’re easily affected by moving visuals, this might be one to head into with some caution. (Some moments could actually be dizzying.) I give this one 4.4 out of 5 stars.