Billy Batson (Angel) discovers the true hero inside himself when a powerful wizard gives him the key to transforming into Shazam (Levi). That key soon becomes the focus of a dangerous man (Strong) who comes after Billy and his family.

This film is the latest creation within the DC comic book universe (DCEU). Shazam! is based on characters created by Bill Parker and C.C. Beck (Black Adam). The story was crafted by Henry Gayden (Earth to Echo) and Darren Lemke (Turbo), with Gayden finishing the script. David F. Sandberg (Lights Out) was chosen to direct the film. The cast of this one features Zachary Levi (Tangled), Mark Strong (The Imitation Game), Asher Angel (Driven to Dance), and Jack Dylan Grazer (It).

Henry Gayden did a really nice job finding a new approach within the DCEU. This one combines good drama with some great comedy, making it much lighter than most of the previous DC films. This one introduces a number of great new characters with some really entertaining opening scenes. The dialogue is witty and fun, and stays true to the concept that Shazam is really just a teenage boy inside. This is still an origin story at its core, and it doesn’t do anything too unexpected. There are some good twists and turns throughout the movie, and it pays off on the different setups. It’s also fun to see Billy/Shazam learn the extent of his powers. The action scenes in this one are nicely written and well-placed, leaving this one feeling balanced. Overall, fans of comic book films should enjoy this story. 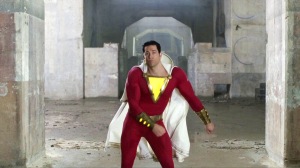 The actors did an excellent job bringing this one to the big screen. The story needed a grown man who could convincingly play a teenager in an adult body. This is where Zachary Levi came in. He does a great job with every aspect of his performance. He also did a good job connecting his work with Asher Angel’s performance, creating one character with two different faces. Angel has great moments of his own throughout this one as well. Jack Dylan Grazer also does a solid job in the film, playing sidekick to the confused and conflicted Billy/Shazam. Mark Strong was a great choice to play the villain in this one. He does excellent work bringing out the diabolical nature of his character. The collection of performances in this one are a lot of fun. This is a refreshing new approach to the DCEU, and there isn’t a bad performance in the bunch.

This one brings the action to life with some great visuals. While this one didn’t have the budget of a larger release, the CGI work doesn’t disappoint. The movie also has a solid score, composed by Benjamin Wallfisch (Hidden Figures). Overall, this is a movie without any glaring production issues.

It’s also interesting to see how this fits in with the other films in the DCEU. In some ways this one feels like a fresh start. It’s much lighter fare than movies like Justice League and Batman V. Superman: Dawn of Justice. This film does leave room for a sequel, and it will be interesting to see how the studio follows it up. I would definitely suggest this one to fans of DC comics. This is also one that fans of the stars need to see. This is a family film with a lot of fun throughout. I give this one 3.8 out of 5 stars.