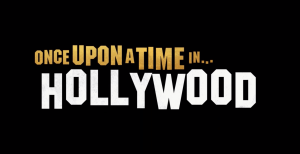 Written and directed by Quentin Tarantino

A faded television actor (DiCaprio) and his stunt double (Pitt) strive to achieve fame and success in the film industry during the final years of Hollywood’s Golden Age.

This film is the latest creation from the mind of Quentin Tarantino (Pulp Fiction). The stars of the movie include familiar faces from other Tarantino films including Leonardo DiCaprio (Django Unchained), Brad Pitt (Inglourious Basterds), and Bruce Dern (The Hateful Eight). The cast also features Margot Robbie (I, Tonya) and Margaret Qualley (Novitiate). Throughout the movie there are a lot of recognizable faces bringing the characters of 1969 Hollywood to life.

This story is a unique drama told on a nostalgic backdrop of the late 1960’s in Hollywood. Tarantino creates a set of fictional characters that make sense in his version of the era. He does a nice job of showing the audience who these two men are, and who they used to be. The movie also builds around two additional story lines. These stories include Sharon Tate, Roman Polanski, and members of the Manson family. Keep in mind that this movie is not a slave to history, and the film features a number of twists and turns that are guaranteed to surprise a new audience. The movie features some great moments that highlight the changing of the guard going on in Hollywood. A number of legendary figures are portrayed throughout the film. This story moves along at a steady pace before breaking into a sprint in the final moments. Fans of Tarantino’s other work will likely enjoy this one.

The actors did a great with the material they were given. Leonardo DiCaprio finds a deeply emotional approach that gives Rick Dalton an unexpected level of humanity. He also has wonderful chemistry with all of his costars. Brad Pitt also delivers a solid performance in this one. Margot Robbie adds a wonderful performance of her own, bringing Tarantino’s version of Sharon Tate to life. She does a great job giving depth and personality to her character. Margaret Qualley also does great work in this one. Her performance is one of several that help to connect the different stories being told. Bruce Dern also does a nice job playing a smaller part in this movie. The actors throughout the movie all do a great job connecting with the material as well as the era the story exists in. The cast also manages to make the best of the unique brand of comedy woven into the story. They definitely make this one worth the watch.

This production team did a great job making use of actual locations whenever possible. Anyone familiar with Hollywood history will enjoy seeing landmarks returned to their late 1960s appearance. Cinematographer Robert Richardson (JFK) did an excellent job using these locations as well as the wonderfully designed sets. The imagery has a nostalgic feel that helps to keep the era of the story present. The costuming also helps to keep the 1960s alive throughout the movie. One of the biggest challenges of this movie was keeping the pace moving. The early parts of this movie move slowly, allowing the world to slowly build around the central characters. Editor Fred Raskin (Django Unchained) did a nice job keeping the pacing of this one from slowing too much. Later, Raskin’s work lets this one go into high gear for the wild finale. The visual components of this one come together to create a world where this story makes sense, and where history comes to life. All of this is accentuated by perfectly selected music, making this a well rounded movie experience.

This is a fun movie that Quentin Tarantino fans need to see. Like all of his movies about the past, Tarantino is not a slave to history. Instead, we see a unique vision of the way things might have been. The performances are great from all of the talented stars, and the production work does all the right things. As with all of Tarantino’s films, this one has violence that might not work for everyone. I give this one 4.8 out of 5 stars.